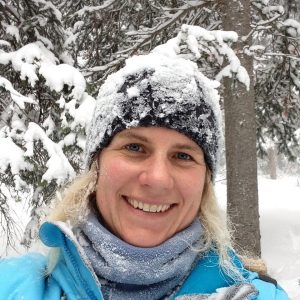 This past summer I stumbled into the presence of greatness, and they were young.

My teenage daughter and I were volunteering at the GoPro Mountain Games rock climbing competition in Vail, which also happened to be the only US stop on the International Federation of Sport Climbing World Cup circuit. Essentially, the pros who were climbing there that weekend were most of the world’s best.

I’m not a climber, so as I casually chatted with them behind the scenes while they waited for their turn on the route, I was unaware that my daughter the climber, who had the up-close but not-as-personal job of brushing the chalk off climbing holds, was freaking out.

“Mom! You helped Janja Garnbret find her shoes! You were talking to Shauna Coxsey about her trip!” she squeaked. You might have to Google them as I did, but they’re really good. And then it hit me – I’m old enough to be their mother.

I’m not alone in this “shocking” realization. A lot of us go along with our lives, feeling pretty young and at least a little bit hip, and then boom – right in front of our faces is evidence that we are old enough to have birthed someone who is now a successful adult.

When it comes to living a physically active life, it’s what you do with that information that matters. For the most part, I choose to ignore it. That’s not to say I dismiss all the years behind me that have led to the older-wiser-stronger state of feeling pretty comfortable in my own skin. But I also don’t let it hold me back.

With a few rare exceptions, I’m not one to say, “I’m too old for that.” The one thing I’ve let go is playing soccer, and that’s only because I ended up with a concussion the last time I tried to keep pace with players 20 years younger. If there were a middle-aged women’s league around here, I’d be there.

I’ll add a disclaimer here – at 45; I’m not actually that old. Maybe I don’t bounce back as quickly as I used to and I definitely don’t fit into my college-age clothes, but I’m solidly in the middle of life. “Older” applies better here than “old.”

Still, it’s not uncommon for people my age to start giving things up – active things that have helped keep them happy and healthy. It might be the emerging discomforts of aging, a lack of time, or maybe just a subtle shift toward more sedentary interests. A lot of people probably don’t even realize it’s happening. But somewhere down the road they find themselves out of shape and feeling older than they need to because it did, somehow, happen.

I prefer an approach similar to the one I took back when my daughter was a baby – you might not do things exactly the way you used to, but you can still do them. And it really isn’t too late to start something new.

Take, for example, a friend of mine who was not an athlete growing up. She was busy with music and school, but sports were not her thing. She started mountain biking and trail running when she moved to the West as an adult, progressively getting more addicted to her new interests, and these days she kicks my butt in almost everything.

Since I started the OlderWiserStronger Instagram feed, which celebrates women over 40 being active in the outdoors, I’ve been surprised more than once when women who are featured tell me how old they really are. “What?!?! I would never have guessed that!!!” is a common response.

These women, I’m convinced, defy their age not just because they’ve stayed active but because they don’t let “I’m too old for that” become their default mode. Their default is “I can do that,” even if it means something a little different than it used to.

Competition and weight management motivate some people, but they don’t work for everyone. It’s important to be mindful of the other rewards that are just as valuable if they keep us going back. Camaraderie, stress relief and the experience of nature – whether peaceful, awe-inspiring or something else – are mentioned often.

Whatever gets you out there is the motivation that matters the most. If you’re still getting after it, keep it up. If you’re not, figure out what’s holding you back and find a way around it. It might be a different or even a new experience, but we’re older, and we’re wiser, and we can be stronger, too.