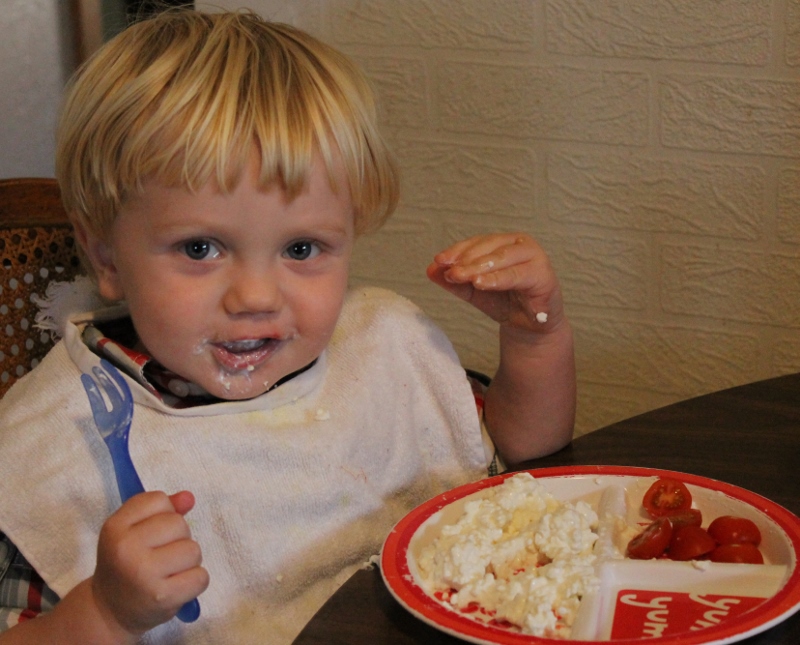 Palisade, Colo. – It’s just after 3 p.m. on a Tuesday, and Sarah White is feeding her son, Oliver, a snack.

The toddler is a big eater. White, a 21-year-old single mom and college student, cuts cherry tomatoes at the kitchen counter of her Palisade home while Oliver devours a banana.

Mom sits next to him at the kitchen table then and offers him a plate of cottage cheese and the sliced tomatoes.

“Pease?” Oliver says in toddler speak for “please.” He points to the bananas in the fruit bowl nearby on the table.

Oliver accepts. He eats red grapes and all of the cottage cheese. He lets Mom eat the sliced tomatoes.

A healthy snack is part of the afternoon routine for Oliver and his mom, who is studying kinesiology at Colorado Mesa University. She plans to graduate in May 2016 and then wants to teach physical education.

“I love health,” White says. “I’m interested in making a better future. That starts with learning how to take care of your body.”

Physical activity is a huge part of taking care of your body, White says, though she is more concerned with being active than being toned or muscular or a certain number on the scale.

Together, she and Oliver do all sorts of physical activity. They walk to the park, bike, hike and even run. When the weather’s chilly, White works out inside. She uses Oliver as a weight, squatting while holding him, for example, and even tossing him gently in the air. (That’ll tone your shoulders).

And she isn’t doing it just for herself. White believes in teaching by example, the notion that Oliver will learn more by watching Mom’s actions than by words that come out of her mouth.

“If we exercise every day or go outside and do something every day, he’s going to say, ‘Oh, that’s what we do.’”

Healthy eating is the second part of taking care of your body. White doesn’t buy junk food (if you buy it, you’ll eat it, she says), though she allows an occasional trip to Taco Bell.

Usually, White plans the week’s meals every weekend, writing dinners on a chalkboard on a wall of her kitchen. A week’s menu might include chicken curry, enchiladas, stir fry and fish tacos. She relies on a slow cooker at least once a week, putting the ingredients in before class in the morning and coming home to a prepared dinner at night.

White uses fresh produce whenever she can. She planted a garden in her backyard where she grows zucchini, green peppers, tomatoes, kale, green beans, spinach and carrots. Her goal is to grow vegetables that are expensive to buy. What she and Oliver don’t eat fresh gets canned or frozen for use later.

When not running, hiking, biking, cooking or gardening, she and Oliver go swimming, color, read, play and do household chores. Sometimes, White will take Oliver with her to CMU sporting events.