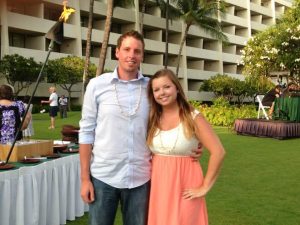 Since having my daughter, I’ve spent a lot of time worrying. Is she sleeping enough? Is she warm enough? Is she eating enough? Is she eating too much? I could keep going, but you get my point. After nearly a year and a half, I’m happy to report that the initial concerns of parenthood and the typical new mom anxieties are gradually fading into something more manageable. We’ve fallen into a familiar rhythm, and I’ve learned to accept the near constant changes of a growing toddler.

But in the old anxiety’s place, there’s a new one growing. Parenthood has underlined, circled, and highlighted everything I can’t control or protect my daughter from. I can’t watch the news anymore, and I’ve learned to scan my Facebook feed from my peripheral to filter out the negative stories. But things slip through- I don’t live under a rock- and when they do, I can’t help but project my daughter’s image into the narrative, and suddenly, empathy is an understatement.

If you’re a parent, I’m certain what I’m describing is completely normal; a rite of passage of sorts. But in a world full of the unknown and uncontrollable, what frightens me the most are the insecurities that originate from within. I believe a certain degree of self-doubt is normal, and there’s strength in overcoming it, but I also think society puts a lot of pressure on the young to look, act, and be a certain way. And the emphasis on superficial qualities is directed heavily toward girls and young women.

I thought I had plenty of time before I had to worry about this sort of thing – my daughter’s most recent developmental milestone was distinguishing her gibberish word for “dog” from “dad” by panting or barking. But, I already see the societal coercion categorized in the pink and blue toy aisles and the witty sayings printed on t-shirts in the same colors. Little boys’ apparel broadcasts messages like “too cool for school” and “boys will be boys” while girls’ shirts say things like “born to shop” and “pretty little princess,” as if these are qualities to aspire to. Don’t get me wrong, I don’t think these things are harmful in isolation, but I see the pink princess mentality everywhere I go and I don’t want my daughter to think that’s what’s expected of her. Pink doesn’t have to be her favorite color, and she doesn’t need to be rescued like the stereotypical princesses I grew up with.

I worry that these types influences will undercut my daughter’s confidence and individuality if she doesn’t quite fit that mold; that she won’t think she’s enough or that she’s beautiful the way she is. I understand that insecurities like these are normal to an extent, especially in adolescence, but it seems to me that it’s beginning earlier and becoming a deeper, more permanent state of being. I feel responsible, both as a parent and as a member of society, to do something about it and the most logical place to start is within.

These influences are just part of the equation.  In my next blog, I’ll discuss my personal insecurities, past and present, and how I plan to address them as a mom.