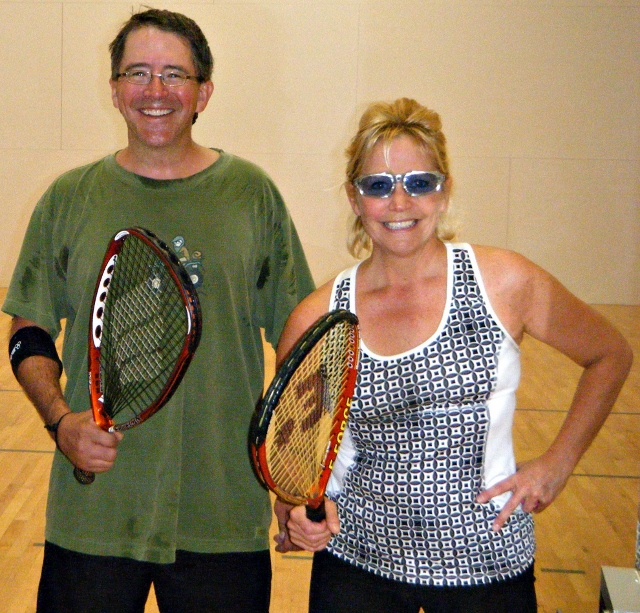 My friend, Jim, and I have been playing racquetball together for about three years now. I played a few times as a teenager when we finally got a health club in our little Wyoming town and then several times a week during college. The one and only court on campus was always booked, so a friend and I would often meet and play at 10 p.m., 11 p.m. or midnight when there was sure to be no one there. I also played for several years in Denver, against a French woman, Jeanne Marie, while in my 20s. Before kids.

Twenty years later, I am playing again and it’s so much fun. Jim and I play at 5 a.m. and/or 6 a.m. several times a week and have been doing so for over three years now. We are a good match for each other and I suppose that is why our racquetball run has lasted as long as it has. OK, and also because we both show up on time. And because he doesn’t grouch when he gets beat by a girl and I don’t use the “I’m a girl, you’re a boy” excuse when he beats me. And for sure, too, because he doesn’t plow me over or whack me with his racquet when I get in his way, which is often.

About a year ago, Jim’s elbow was bothering him and he was having trouble playing more than a couple of games at a time. So we decided to try and play left-handed and give our right elbows and shoulders a break. In fact, we made it our New Year’s 2013 Resolution to always play the first game left-handed every time we got together to play.

Oh my gosh, it was horribly frustrating at first and so mentally taxing. Not only was it hard to hit the ball, to actually make our racquets come into contact with the ball, but when we did, we hardly had the strength or accuracy to get the ball back to the wall. And, though we’re right-handed, it was so hard to catch that little ball with our right hands. Our brains and bodies were just used to having our left hand do that work since our right hands always had a racquet in them. The most puzzling thing was that we couldn’t run as fast with the racquet in our left hand. When I tried to move quickly, it would sound like stomp, stomp, stomp, stomp and I’d rarely get to the ball in time. Jim would laugh and I would mutter, “Stupid left-handed running.”

If we happened to be playing doubles the first game of any day, we’d still use our left hands. We’d dub ourselves the Non Doms (non-dominant hand) and would usually lose.

But we stuck with it. We kept saying, “We’ll be so happy when/if we get an injury and can’t ever play right-handed again because we’ll be pretty decent by then playing left-handed.” Interestingly, this is the only New Year’s Resolution I’ve ever kept for an entire year and then beyond. Fourteen months later and we really are pretty decent at playing left-handed. And, because I lived through all the mental anguish of my brain adjusting to the switch to left-handed playing, I know it was good for me in ways other than just physical.

Now, if I could just learn how to run left-handed.

Randee Bergen is a single mother of two teenagers and an elementary school teacher. Read her Fridays on Healthy Mesa County.